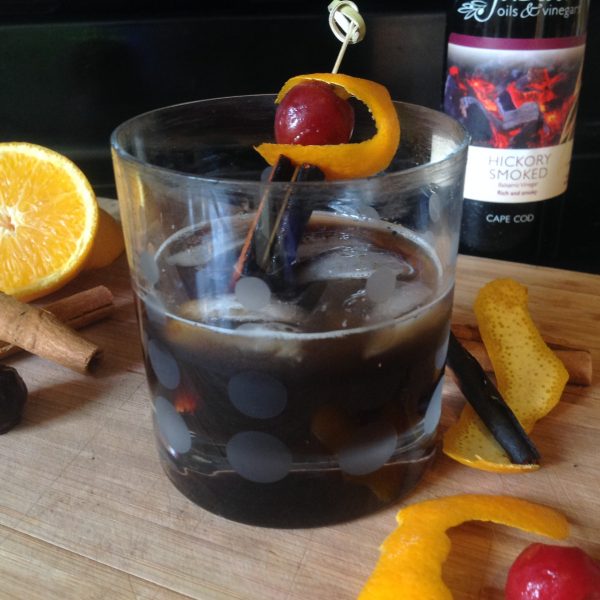 Smoke need not be limited to southern barbecue cuisine, although my mouth waters just thinking about that deliciously classic option.  In recent years, it has become a trendy component in every dinner course from appetizers, to soup, to dessert.  But it is often over-used and can easily dominate the flavor profile of an entire dish, rendering all other ingredients imperceptible. Here, I’ve added it as a hint of depth – a layer of cozy, smoky goodness to one of my favorite drinks, a bourbon old fashioned.  I believe you will find it equally appealing to sip while snuggled up to a roaring fire on a blustery winter night, toasting family and friends throughout joyous holiday celebrations, or watching fireflies in the moonlight beside a backyard fire in the ever so slight chill of a summer evening.

1 strip of orange peel, approximately 3 in x ½ in

Note:  If you don’t have a kitchen torch, if you are a particular fan of smoke infusion, or if you really love specialty bourbons, you may add additional smokiness to your drink by using Knob Creek Smoked Maple Bourbon.  This is actually my favorite version of the drink.  You may also light the orange peel and cinnamon stick with a lighter and allow them to burn.  The flame is not as powerful as a torch, so it may take a bit longer, but your goal is to blacken them and create enough smoke to cause the overturned glass to become completely opaque during infusion.

Other Recipes You May Enjoy